Want To Stop Your Alloy Boat From Being Eaten By Corrosion?

Sea Guardian systems are designed to stop galvanic corrosion in aluminum boats.
Australian made, maintenance free – built to save your boat.

Other Experience With The Sea Guardian... 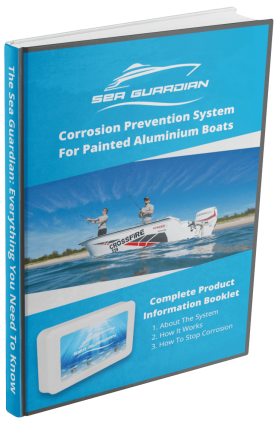 Looking To Stop Corrosion In Your Painted Aluminium Boat?

A system designed to save you time, money and keep the boat you love.

About The Sea Guardian:

The story of the Sea Guardian began in 2014, driven by market demand. After speaking with numerous people, we realised they were all having the same problem – galvanic corrosion. After speaking with more and more customers, we began to see the following recurring issues:

After hearing the amount of effort our customers had put into trying to save their boats, it became clear this was a massive issue. Worst of all was that it was a problem there was no clear-cut solution to.

Put simply, the Sea Guardian is an electronic system, designed to prevent corrosion in painted aluminium boats. It does this by applying a negative static charge to the boat, reducing the reactiveness of the aluminium and thus, the rate of corrosion.

The Sea Guardian System is designed to: